Over at On The Windy Side and Play Crafts they are co-hosting a quilt-making challenge based around Pantone's current colour of the year, Marsala.
The colour has intrigued me since Pantone announced it, as it is not what you'd look at and straight away think of as a "star" colour. But quilting has taught me that every colour is a star so I took up the challenge, and decided to make a quilt that would get me to love Marsala. 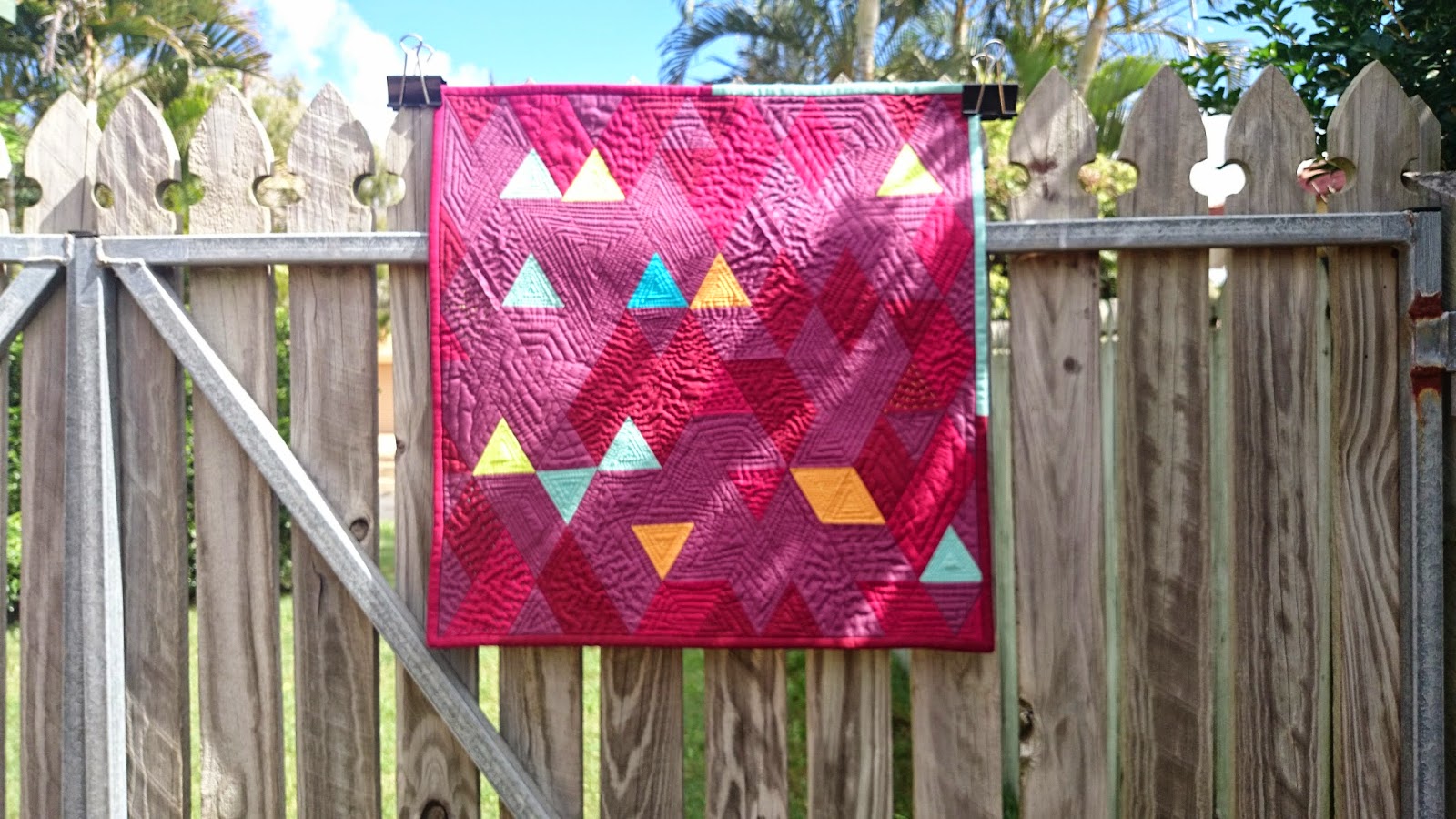 I knew that if I was going to do this challenge, it would have to be in solids. How else to make sure that Marsala was shining through on its own virtue?
So on a visit to Spotlight to pick up some white perle cotton, I impulsively checked out their solid collection to see if there were any that resembled Marsala. I was surprised to find one that was almost exactly the right shade, along with some more wine-like colours that are closer to what I think I was wishing Marsala looked like.
So I took it as a sign and they fell into my basket, along with a couple of other colours that I thought would work well with my plan. Oops! So much for just buying white thread! :P 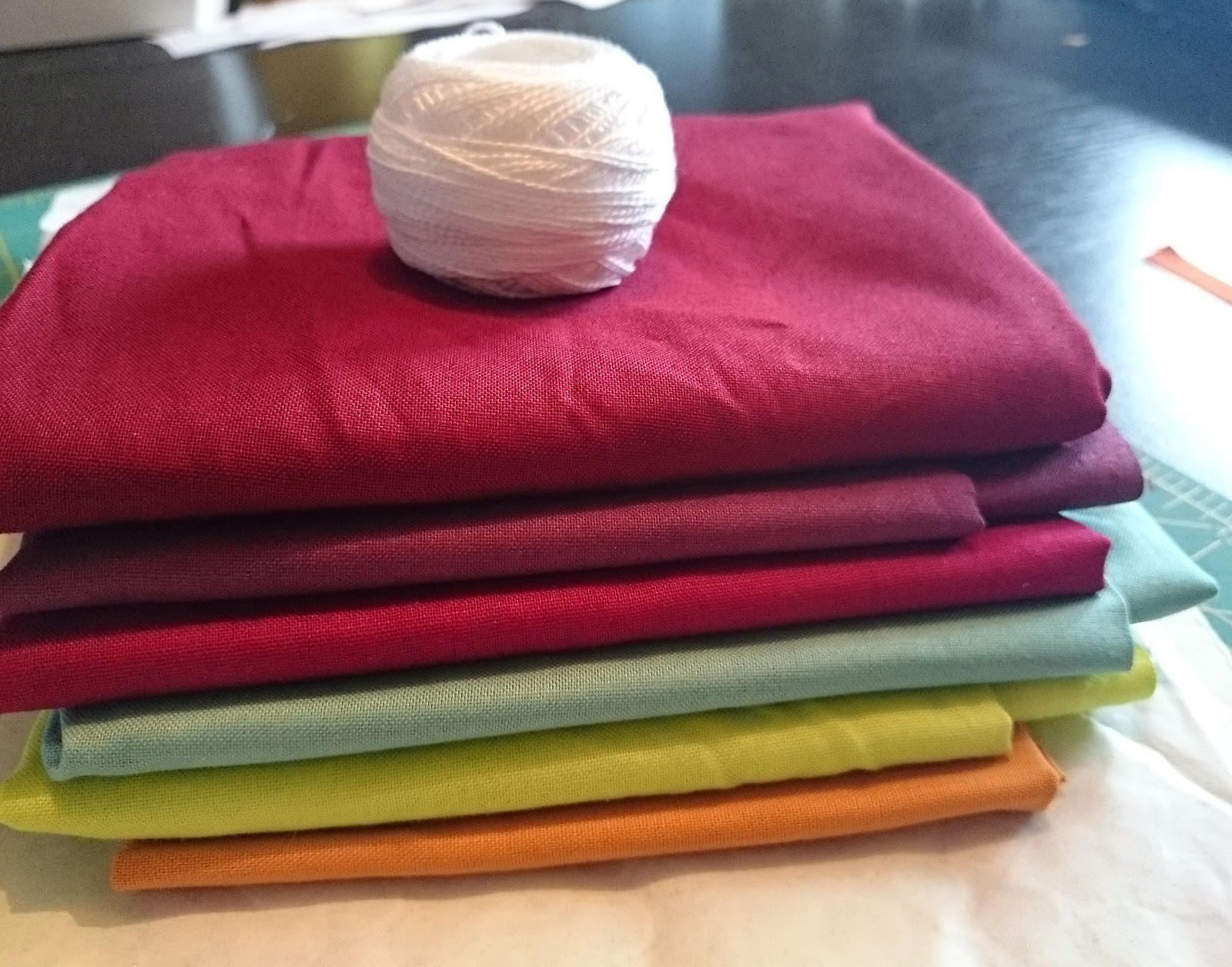 Marsala's greatest strength is the way it allows colours around it to really shine, so I wanted to highlight that in different ways in my quilt. I wanted to make it a celebration of Marsala.
I knew that the ratios of each colour in the mini quilt would be crucial to its success so I played around with a few combinations.
Eventually I settled on having the highest amounts being the almost-Marsala colour. Then equal amounts each of the two wine shades, followed by only a tiny amount of some colours that I thought Marsala would give a great "pop" to. Amongst those colours were both a bright and a dull version of aqua which I hoped would echo the comparative brightness and dullness of the wine colours and the Marsala.
I cut them all into 2.5" strips and used my Sidekick Ruler (have I mentioned recently how much I love that thing?! ) to cut triangles and diamonds out of the Marsala and wines, along with just a couple of triangles of the contrasting colours.

I sewed one almost-Marsala triangle to each of the coloured triangles to make diamonds. Some of these other colours were even dull-looking on their own, but paired with Marsala they really sing.
Next it was time for the fun part: putting all my diamonds into a bag and mixing them up. I planned to sew them together randomly, just pulling two out without looking and sewing them together, followed by another one, and another, until I'd finished the number I needed to sew together for each row. This way it was just left up to chance which colour ended up next to each other, and I was hoping some interesting shapes would emerge.


When the time came for quilting I wanted to define the quilt, add texture, and refine the way Marsala made those little triangles shine. I also wanted to highlight the way those colours made Marsala shine, because unexpectedly, to my eyes that's what had happened.

My original plan was to completely machine quilt it, but my machine was not liking the Marsala coloured thread so I ended up doing a lot of handquilting on it, and I think that is what ended up "making" the quilt. Just like that seam on the wrong side starting out as a mistake, I think my quilt was always meant to have a combination of hand and machine quilting. While quilting this, I even realised that this is probably almost my signature: a mix of both quilting styles.

I machine quilted a triangle spiral in all the little coloured triangles, then did some more machine quilting to tie the Marsala and wine colours together in sections. Some of the quilting was free-motion, some was with a walking foot, and all of it was spiralling into the centres of each section I'd chosen. I varied the stitchlength, and also the spacing between lines to give it some more movement.
When I was handquilting, I kept up that theme. Varying the length and density of my stitches, and even using some contrasting thread in the same colours as the little triangles to reinforce the relationships between the colours I chose. 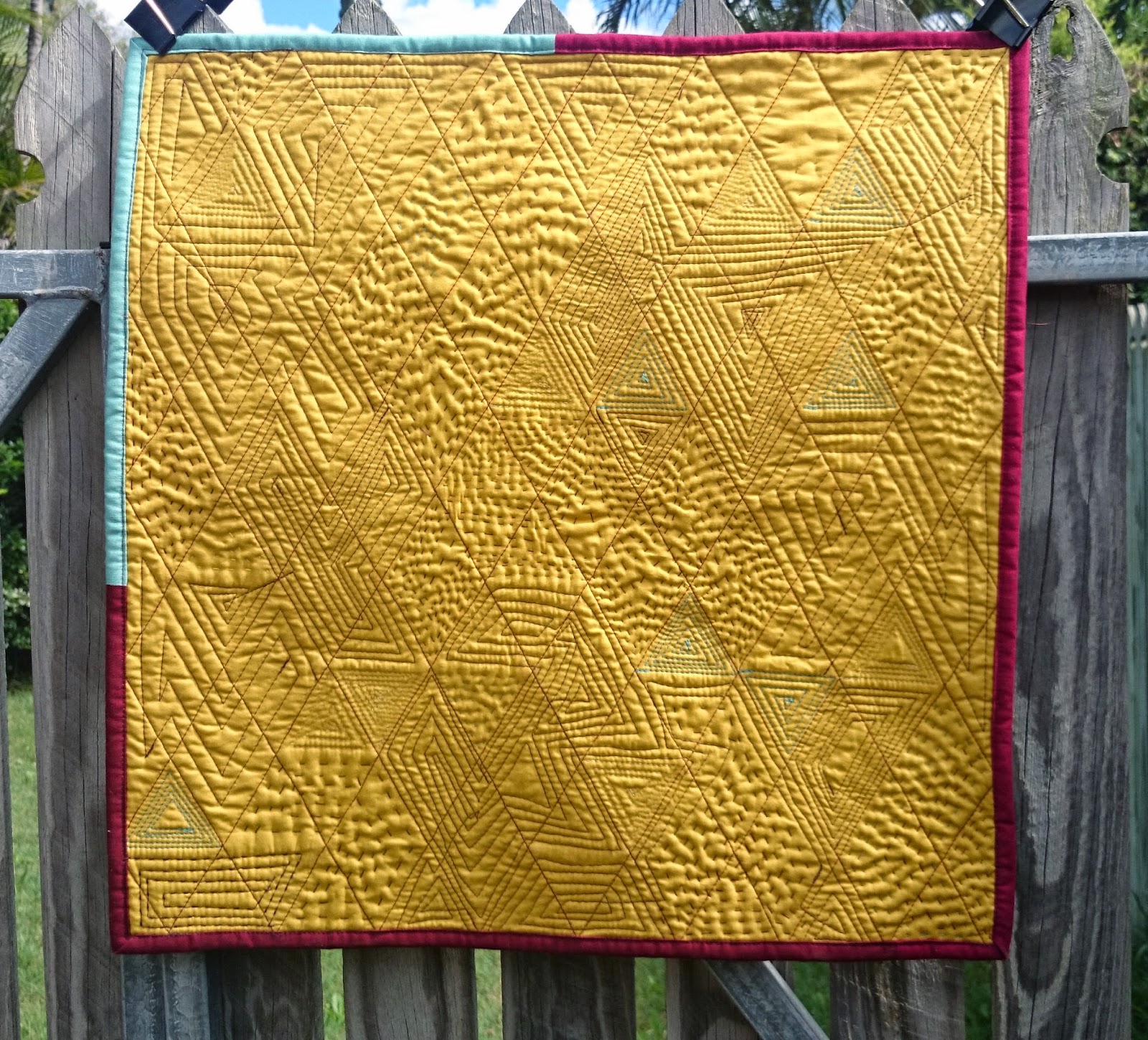 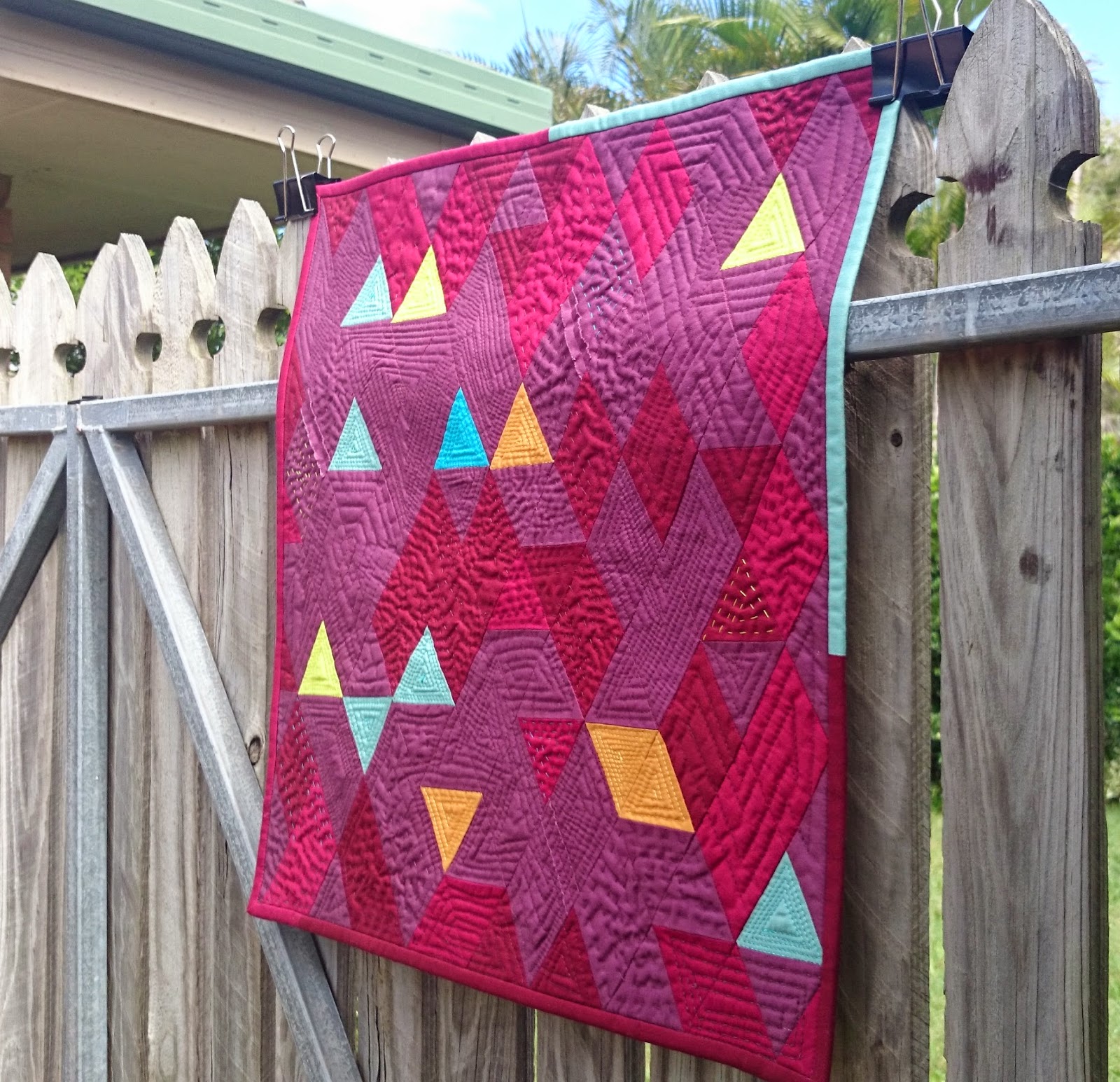 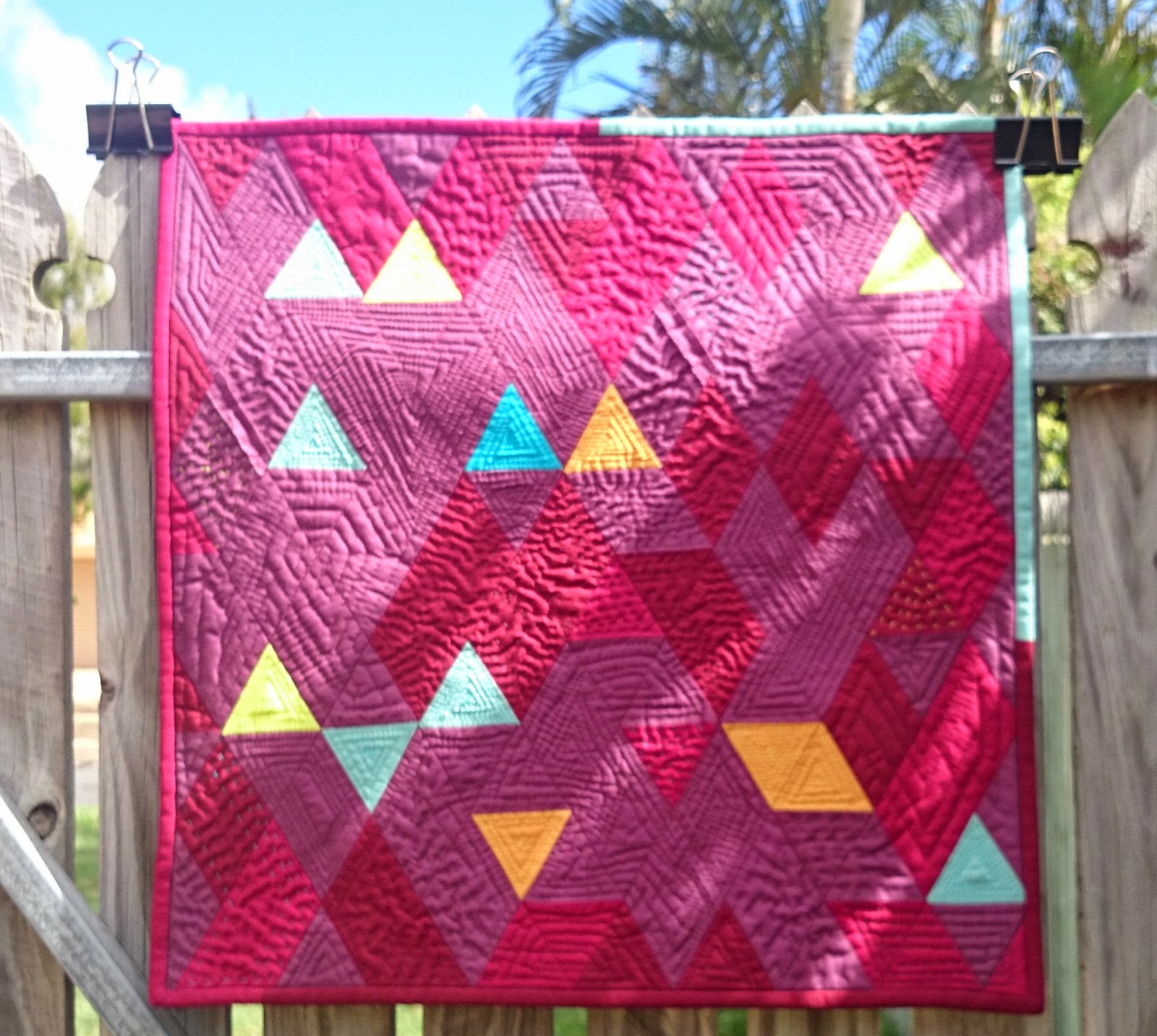 My name is Luelle, some people call me "Strange", and I have a confession to make. Turns out I actually love the colour Marsala after all! I'll definitely be using it again. :)

This mini quilt ended up at 19.5" x 20".
Go here or here to check out all the other entries in the Challenge.

I love comments! Err, no I don't. They scare me because eek, people!
But I need to step out of my comfort zone, so comment away and hopefully I won't find them so scary after all. :D